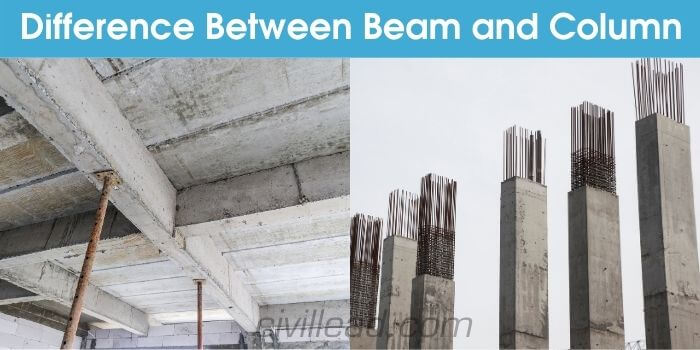 A structure mainly consists of a slab, beam, column, and footing. The beam is a horizontal structural component that mainly carries vertical loads.

In contrast, columns are vertical compression members that span from substructure to superstructure and have a vital role in transferring load from the top of the structure to the foundation.

A beam is a horizontal structural component that resists vertical loads. Its deflection mode is originally by bending. It transfers loads imposed along its length to its endpoints to columns and foundations.

When loads are applied to the beam, consequently reaction forces at the beam’s support ends.

The forces applied to the beam cause shear forces and bending moments inside the beam that induce internal stresses, strains, and deflections.

Columns are commonly used to support beams or slabs, or arches. A column is sometimes a decorative element not necessary for structural function, though many columns are embedded, forming part of a wall.

It may also be designed to oppose horizontal forces due to earthquakes and wind. The columns’ location should be specified so that no tensile stresses should be induced at the cross-section.

Column plays an essential role in the entire load transfer system, and without it, the structure can’t exist.

The strength of a column depends mainly on the strength of the material used, length, size, and shape of the column’s cross-section, and geometry.

Also, Read – What is Column? – Types of Column, Reinforcement and Design Procedure

Difference Between Beam and Column

Difference Between Beam and Lintel