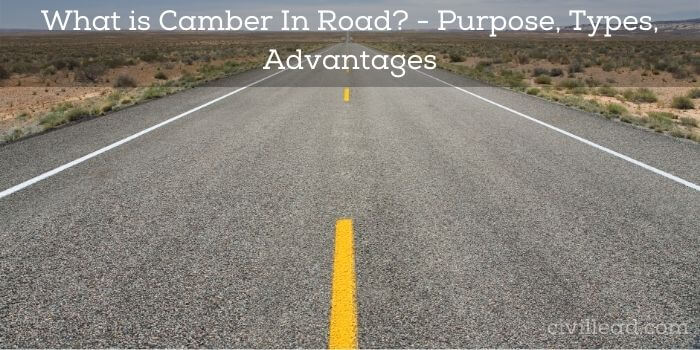 What is Camber In Road?

Camber is the cross slope given in the pavement in a transverse direction to drain out the rainwater from the road’s surface.

Typically, a camber is constructed on the straight roads by upraising the carriageway centre concerning the edge, making the highest point at the centre.

In the case of superelevation at the horizontal curve, the surface drainage is modified by upraising the outer edge of the road concerning the inner edge while providing the specified superelevation.

The cross slope or camber or cross fall rate is typically indicated by the ratio (1: n), which means the slope in the transverse direction is in ratio 1 vertical to n horizontal.

Purpose of Providing Camber in Road

The primary purposes of providing camber in the pavements are as follows:

Types of Camber In Road

Generally, four types of cambers are used based on the type of pavement surface.

The barrel camber is constructed with a continuous curve that may be parabolic or elliptical.  In barrel camber, the surface shape is kept steeper near the edge and flat in the middle part.

Barrel camber is suitable for the roads with fast-moving vehicles because they frequently cross the centre or crown due to overtaking.

Sloped camber is constructed with two straight slopes merging at the centre. It is suitable for rigid pavement surfaces such as concrete roads that are relatively impervious.

It is the combination of barrel and sloped camber constructed with two straight slopes with parabolic at the centre.

Composite camber is suitable for the road with slow-moving vehicles like iron-tired carts, bullocks carts. The iron tire decreases the contact pressure.

Considering the surface type and the quantity of rainfall in the locality, the minor camber required to drain the surface water may be determined. The too steep camber causes the following undesirable effects on the traffic.

The values of recommended camber for various types of road surface by IRC are as follows.

Calculation of Camber in Road

What is WBM Road? – Construction Procedure of WBM Road

Material Required For The Construction of WBM Road

Concrete Road vs Asphalt Road – Which Is Better?