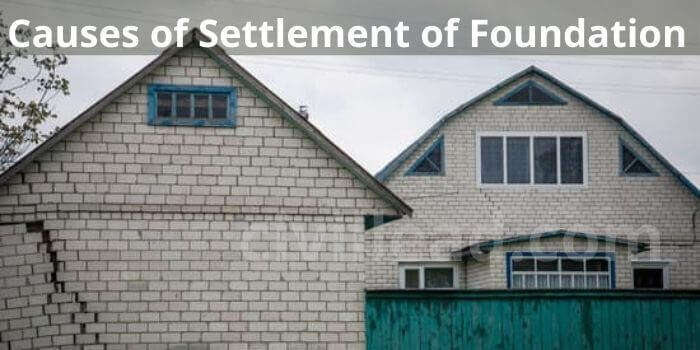 Causes of Settlement of Foundation

When the soil beneath the structure shows a reduction in strength to bear the load above it, the structure will start to sink. This sinking is called settlement of the structure. Following are the causes of foundation settlement:

Structural collapse of some soil, such as saline, non-cohesive soils, gypsum, silt and clay and loess, may occur due to the dissolution of the material responsible for the intergranular bond of grains.

Subsidence of ground may occur due to the removal of minerals and other materials from mines below.

Underground erosion may cause the formation of cavities in the subsoil which when collapse cause settlement.

Change in the vicinity

If there are changes due to the construction of a new building near the existing foundation, the settlement may occur due to an increase in the stress.

Temperature change cause shrinkage in expansive soil due to which settlement occurs.

If landslides occur on unstable slopes, there may be serious settlement problem.

Frost heave occur if the structure is not founded below the depth of frost penetration. When thaw occurs, the foundation may settle.

The settlement may also occur due to creep on clay slopes.

These are the causes of settlement of foundation. if you found this information helpful, please share it with your friends.

What is The Consolidation of Soil? Types and Process

Difference Between Compaction and Consolidation

What is the purpose of providing foundation?