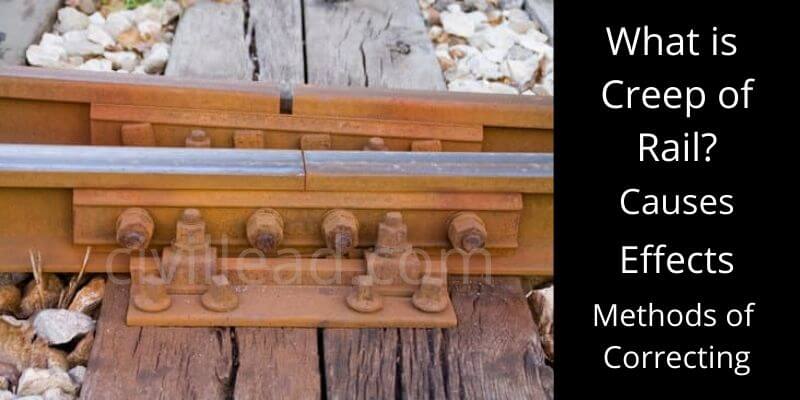 What is Creep of Rail?

Creep is defined as the longitudinal movement of the rails in a track in the direction of motion of the locomotive.

Following are the main causes of the development of creep:

Development of wave motion in the rails by a moving train – Due to the load of the wheel, the portion of the rail under load is depressed slightly. As the wheels move, the depression also moves with them and previous depressed portion regains their original level. Thus under the wheel of a train, wave motion is developed. This wave motion tends the rail to move forward.

Force acting at the time of starting, accelerating, slowing down or stopping the train causes creep. as shown in the figure during the starting operation, the wheel pushes the rail backward, while during the stopping operation the rails are pushed forward.

Creep may also develop due to unequal expansion and contraction of rails due to variations in temperature.

Percussion Theory– According to this theory creep is developed due to the impact of wheels at the rail end head of joints. The horizontal component p of reaction R tends to creep and the vertical component tends to bend the rail end vertically i.e. to better the rail end. Thus as and when wheels leave the trailing rail and strike the facing rail end at each joint, it pushes the rail forward resulting in creep.

Magnitude and Direction of Creep

The following factor governs the magnitude and direction of creep

Alignment of the track – Creep is found greater on curves than straight portions of the track.

Gradient of the track – Generally creep develops in the direction of down gradient but it changes direction frequently.

The direction of motion of trains – In the direction in which more numbers of train move, develops greater creep. Also, the load of the vehicle influences the development of creep.

Following are the main effects of the development of creep:

To measure the creep of rails, creep indicators are used. A chisel mark is made at the side of the bottom flange of the rail and two rail posts are fixed to the formation with their top levels at the top of sleeper. A fishing string is stretched below the rails on the marks on the top of posts. The distance between the chisel mark and the string will be the amount of creep.

The following method can be used to correct the creep:

If you find this article helpful, please share it with your friends.

Finally thanks for reading the article.