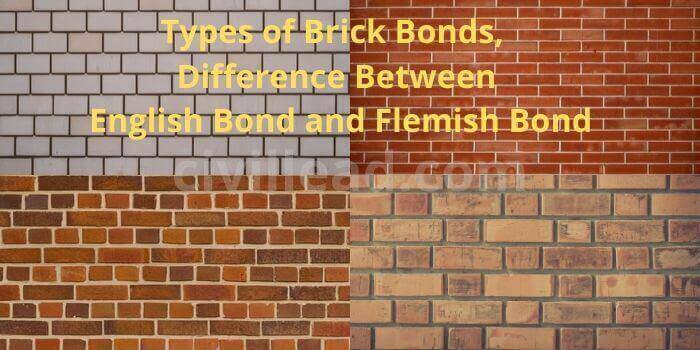 What is Brick Bonds?

Brick Bonds – Bonding is the process of arranging brick with mortar to tie them together. the vertical joints provides in the brick masonry should not continue without proper bonding in between bricks, it is not possible to construct the wall.

Today in this article we are going to know about types of brick bonds and the difference between English bond and Flemish bond.

In this type of bond, all the bricks are arranged in the stretcher course, so the wall having stretchers are in the face.

The elevation of the wall with the stretcher bond is shown in the picture below. this type of bond is useful for one-brick partition walls as there are no headers in such walls.

As this bond does not develop a proper internal bond, it should not be used for wall having thickness more than one brick wall. Some times, it is also called the running bond.

Also, read – What is pointing? Types of Pointing, Purpose and Method.

In this type of bond, all the bricks are arranged in the header course, So the wall having headers in the facing. The picture below shows the elevation of the wall with a header course.

This bond is used for facing curved surface of brickwork. This bond does not have the strength to transmit pressure in the direction of the length of the wall. Thus it is not suitable for the load-bearing wall.

The English bond is considered as the strongest bond in brickwork and it is generally used in practice. The main features of English bond are as follows.

In this type of bond, the headers are distributed evenly and hence, it creates a better appearance than the English bond. Following are the features of the Flemish bond:

Single Flemish Bond – This bond consist of both English bond and Flemish bond. This bond is used when expensive bricks are used for face work. The facing of the wall is built with Flemish bond but filling and backing are built in English bond.

The purpose of this bond to combine the strength of English bond with the appearance of the Flemish bond.

Double Flemish Bond – In double Flemish bond the headers and stretchers are placed alternatively in front as well as the back elevation.

In this bond, the half bats and their quarter bats have required quite amply in-wall having thickness equal to an odd number of bricks.

This bond enables the brick wall to have flush and uniform faces on both sides. This bond is not so strong as the English bond as it contains more number of stretchers.

I hope now you understood about brick bonds and their type and also the difference between English bond and Flemish bond.

If you found this article informative, please be sure to share to.

If you want to give any suggestion, let me know in the comment section.

How to Calculate Quantity of Material For Plastering?

Difference Between Plastering and Pointing