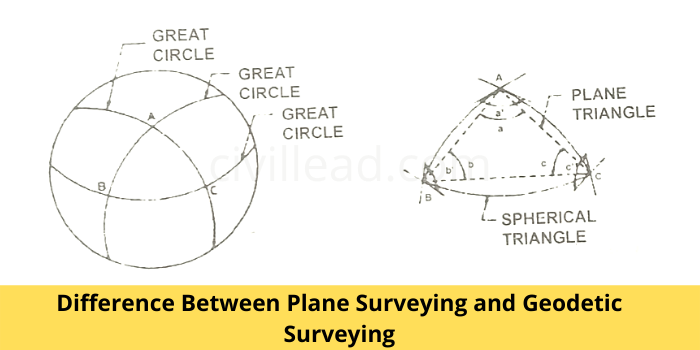 As we know that actual shape of the earth is an oblate spheroid. The length of the polar axis is shorter than the equatorial axis, but this difference is very small.

So that earth is assumed as a sphere for students understanding. Surveying thus primarily divided into two parts

The most usually followed type of surveying considers the earth’s surface as a flat or “plane” surface.

It is suitable for a survey of small areas ( up to 196 Sq. Km) where the earth’s curvature does not affect the results.

All the calculations are performed by using the formulas of plane geometry and trigonometry. Hence the knowledge of plane trigonometry is essential.

Typically, the error related to the calculation’s result is directly proportional to the area’s size to be surveyed.

That means, the larger the area, the higher the error margin. Plane surveys are suitable for surveying the locations and highways, cannel, landing fields, and road construction.

An arc of length 12 kilometres long resting on the surface of the earth is only 1 cm larger than the subtended chord.

For the triangle on earth’s surface holding an area of 196 square kilometres, there is only a one-second difference between the sum of the angles in a plane triangle and the sum of those in a spherical triangle.

It is the type of surveying in which the curvature of the earth is taken into account and a very high standard of accuracy is maintained.

Geodetic Surveying is a type of surveying which deals with large areas where it is essential to consider the earth’s actual shape and dimensions.

Its main aim is not to determine the exact earth’s shape but to establish an accurate and rigid control for all other surveys’ coordination.

This point is often ignored, and the scientific aspect is sometimes emphasized to the more practical side’s loss.

The earth’s dimensions must be known to enable the actual calculation of positions. It is also evident that it is necessary to carry out the geodetic trigonometrical survey before these dimensions can be determined.

The position is that geodetic surveys are carried out, firstly, to establish rigid coordination of all surveys, basing the computations on a previously known value of the earth’s dimensions.

Secondly, as the survey extends or is completed, further data becomes available for a check on the value used or, if necessary, to calculate another value to fit more closely the territory being surveyed.

In a geodetic survey, all lines resting on the surface are curved lines and the triangles formed are referred to as Spherical triangles.

Measurements are obtained with high precision instruments, and calculations are made applying the spherical trigonometry practice.

Each geodetic station’s position is represented employing longitude and latitude, and; GPS (Global Positioning System) is usually employed for this objective.

Difference between plane surveying and geodetic surveying are as follows:

Thanks for reading the this article. Please don’t forget to share it.

What is Contour? – Complete Guide

Difference Between CPM and PERT