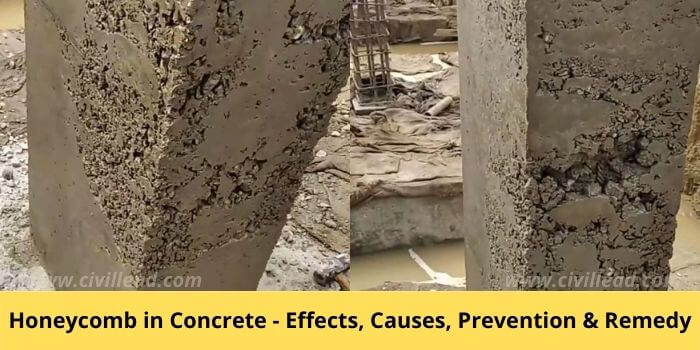 What is Honeycomb in Concrete?

When the finished concrete surface has a rough texture, cavities, voids on the surface, and gaps between concrete and the reinforcement because concrete could not fill that space is termed ‘Honeycombs in Concrete.’ It resembles a honey bee nest.

Honeycomb in concrete is a severe issue that decreases the concrete strength and makes the reinforcement vulnerable to rusting.

Concrete is used to construct different structural members like foundation, beam, column, slab, etc. According to structure design, when concrete is poured into formwork, it flows like a liquid.

Dense places often remain unfilled for various reasons, forming voids and cavities that look like honey bee nests if the concrete is not poured and vibrated correctly, resulting in gaps uncovering the aggregate.

Honeycomb in concrete reduces the strength and gives passage for water, which corrodes bars.

Corrosion is a procedure that continues via bars, even in suitable concrete resulting in losing bond between steel and concrete, which is very harmful to the safety and lifespan of concrete structures.

Honeycombs on the sides surface of concrete members like beams and columns can be found when shuttering is removed if not appropriately cast.

Advanced techniques like ultrasonic testing etc., can only detect honeycombs inside the concrete mass.

Effects of Honeycomb in Concrete

Causes of Honeycomb in Concrete

How to avoid honeycomb in Concrete?

Remedy For Honeycomb In Concrete

By following the steps mentioned above, try to avoid honeycomb in concrete. But due to any reason, honeycomb appears on the concrete surface; it can be repaired by the following method.

Usually, the repair process for honeycomb in concrete members like columns and beams is as follows: