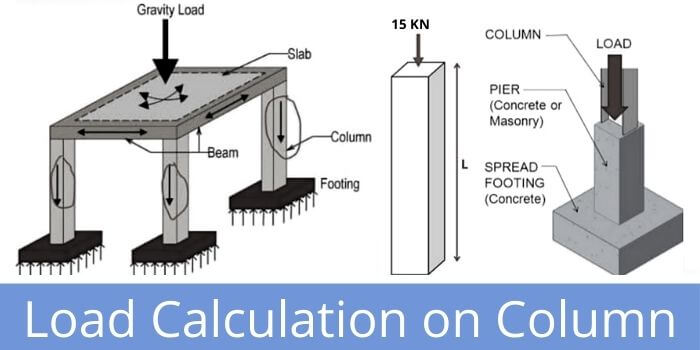 A column is an essential structural member of the RCC structure that helps transfer the superstructure’s load to the foundation.

It is a vertical compression member subjected to direct axial load and its effective length is three times larger than its least lateral dimension.

When a structural member is vertical and subjected to axial load known as a column, whereas if it is inclined and horizontal, known as a strut.

It is an essential structural component of a frame structure that mainly resist load applied laterally to the beam’s axis. Mostly it’s a mode of deflection due to bending.

Due to applied load, there are reaction forces at the support point of the beam, and the effect of these forces produces shear force and bending moment within it, which induces strain, internal stresses, and deflection of the beam.

Its bottom part experiences tension while the upper part tension; hence additional steel is provided at the bottom of the beam than the top.

Usually, beams are classified according to their support conditions, equilibrium conditions, length, cross-section shape, and material.

It is a continuous vertical structure that divides or encloses the space of an area or building along with provides shelter and security. Usually, it is constructed with bricks and stones.

In a building mainly there are two types of walls that are the outer wall and inner walls. The outer wall helps to provide an enclosure to the building.

While the inner wall divides the enclosed area to provide rooms of the required size. The inner wall is also known as the partition wall.

In a building, a wall helps to form a fundamental part of the superstructure and helps to divide interior space and gives privacy, soundproofing and fire protection also.

What is the slab?

A slab is an extensively used structural component that forms the floors and roofs of the buildings. It is the plane element which depth is much smaller than its width and span.

The slab may be supported by masonry walls, by RCC Beam, or directly by column. It carries typically uniformly distributed gravity loads acting to its surface and transfer it to the support by shear, flexure, and torsion.

Types of load Calculation on Column, Beam, Wall, and Slab

Apart from the above loading, columns are also experience bending moments considered in the final design.

The most productive way for structure design is to utilize advanced structural design software such as Staad pro and Etabs.

For professional structural design work, there are some fundamental assumptions that we consider for structural load calculations.

We follow a similar computations procedure for beam also as for column.

Let us consider beam cross-section dimensions as 300 mm x 450 mm, excluding the thickness of the slab.

So, the self-weight would be about 3.5 kN per meter.

For a brick wall of 9″ thickness, 1-meter length, and 3-meter height

This process can be used for Brick’s load calculations per meter for any type of brick.

For AAC blocks (Autoclaved Aerated Concrete) the weight per cubic meter is about 550 to 700 kg/m3.

If you are utilizing AAC blocks for building, loads of walls per meter can be as low as 4 kN/meter. The use of this block can considerably reduce the project cost.

Let us consider the slab thickness of 100 mm.

Therefore, the Self-weight of slab per square meter will be

Hence, we can evaluate the slab load will be about 6 to 7 kN (approx) per square meter from the above calculation.

Load Calculation of the Building

Building load is the sum of dead load, Imposed or live load, wind load, earthquake load, snow load if the structure is located in a snowfall area.

Dead loads are static loads due to the structure’s self-weight that remains the same throughout the building’s lifespan. These loads may tension or compression loads.

Impose or live loads are the dynamic loads due to the use or occupancy of the building including, furniture. These loads keep on varying from time to time. Live load is one of the important loads in design consideration.

For calculating the live load of the building, we have to follow the permissible load values as per IS- 875 1987 part 2.

Usually, we consider the value of the live load for residential buildings as 3 KN/m2. The value of live load varies according to the type of building for which we have to follow the code IS 875 -1987 part 2.

For calculating the dead load of the building, we have to determine the volume of each member like footing, column, beam, slab and wall and multiplied by the unit weight of the material from which it is made.

Lastly, after calculating the entire load on a column, don’t forget to add the factor of safety, which is most vital for any building’s structure design for its safe and suitable performance during its service life.

It is essential when the Load Calculation of the Column is done.

I hope now you understood how to calculate the load on column, beam, wall and slab.

What is Plinth Beam? Plinth Protection – Difference Between Plinth Beam and Tie Beam

What is Column? – Types of Column, Reinforcement, Design procedure

What is Column? – Types of Column, Reinforcement, Design Procedure

What is Column? A column is an essential component of...