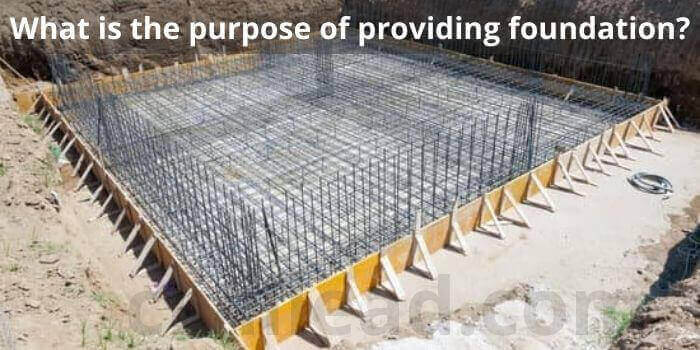 The lowest part of the building which located below ground level and which transmit loads of the structure to the ground is known as foundation/substructure.

The ground on which foundation resists is called foundation bed. The lowermost portion of the foundation which is in direct contact with the subsoil is called the footing.

The basic function of the foundation is to transfer the dead loads and live loads and others loads to the subsoil. The foundation serves the following purposes:

1. Foundation distributes loads of the superstructure to a large area of so as the intensity of the load at its base does not exceed the safe bearing capacity of the subsoil.

2. Foundation distributes the uneven load of the superstructure to the subsoil evenly.

4. It provides safety to the structure against undermining or scouring due to animals, flood water, etc.

6. Foundation gives the lateral stability to the structure against various horizontal forces such as wind, rain, earthquake, etc.

7. To transmit the superimposed load through side friction and end bearing in case of deep foundation.

9. To prevent or to minimize cracks due to the movement of moisture in case of weak or poor soils etc.

A good foundation should fulfil the following requirements :

1. The good foundation should be able to take dead and live load.

2. The good foundation should be taken sufficiently deep so as to reach for hard strata.

3. The base foundation should be rigid so that differential settlement is minimized.

4. The foundation should transfer the load of the superstructure in such a way so that pressure on subsoil will not cause settlement.

5. The foundation should be so located that its performance may not be affected due to any unexpected future influence.

6. The area of the footing should be much larger so as the intensity of the load as its base does not exceed the safe bearing capacity of the subsoil.

Thanks for reading this article. Please, don’t forget to share it.

Causes of Settlement of Foundation

Types of Foundations & Footings And Their Uses

What is the Consolidation of Soil? Types and Process

Difference Between Compaction and Consolidation

What is Plinth Beam? Plinth Protection – Difference Between Plinth Beam and Tie Beam