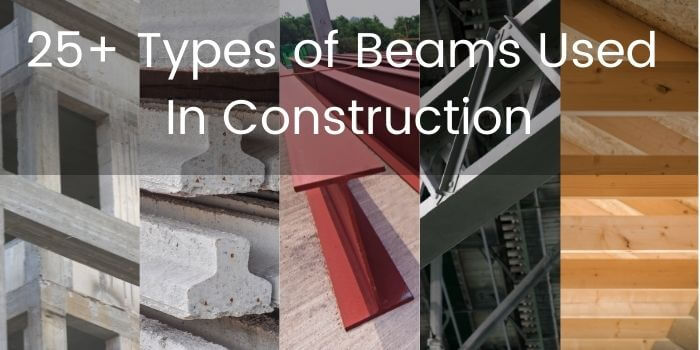 Beams are horizontal structural members that counter vertical loads applied along the axis of the beam and resist shear force and bending moment caused by the applied load.

A beam is a structural element in which one dimension is very large than the other two, and it is subjected to a system of external forces acting at a right angle to its axis.

They are well supported on one or more ends. The beam’s effective length between two end support is termed as span.

They transfer the load applied along the beam axis to supports such as columns, walls, and foundations.

In this article, we will know the different types of beams used in construction.

Based on Support Condition

A beam is called a simply-supported beam when both ends of this beam rest freely on supports.

As its name indicates, it is one of the simple and most essential types of a beam containing pinned support at one end and roller support at the opposite end.

It is depending upon the type of load, this beam experience both shear force and bending moment.

If both the end of a beam are fixed or built in to resist rotation, it is termed a fixed beam. This beam doesn’t allow horizontal, vertical, and rotational movement.

Reinforcements are also provided at the end connection to restrict the rotation of the beam.

All multistorey buildings consist of the fixed beams, but the way they are fixed looks different.

A beam whose one or both of the end parts extends beyond the supports is termed the overhanging beam.

Usually, beams on both ends are supported by columns, but an overhanging beam from one end extends beyond the support. These beams are primarily used in balconies.

This beam has greater than two supports, identified as continuous beams. Extreme left and right supports are known as end supports, and the rest are known as intermediate supports.

Based on cross-section shape

These beams resemble the shape of capital T and are primarily constructed with reinforced concrete slabs monolithically.

To enhance the compressive strength of concrete, sometimes an isolated T beam is also constructed.

Moreover, according to the applied load need inverted T beam may also be built. T -Beam helps to reduce deflection significantly and offers to select larger span as compared to rectangular beam.

These beams are provided around the perimeter of the structure and cast monolithically with an RCC slab. Thus it acts as an L beam rather than a rectangular beam.

You can find these beams around the building perimeter where the slab is not projected beyond the beam axis.

I-beam resembles the shape “I” is an essential member of steel structure. It comprises two flanges united by the web. These beams are mainly used for steel structures, bridge support frames, etc.

H- Beam resembles the shape capital “H” and is an essential member of a steel structure made of rolled steel. H- beams are usually used in commercial and residential buildings due to their excellent mechanical properties.

Also, Read – H Beam Vs I Beam – 15 Difference Between H Beam and I Beam

These beams are made of steel in the form of a truss known as a truss beam. Truss beams are mainly used for larger spaces, such as open sheds, workshop sheds, and warehouse sheds.

Based on Equilibrium Conditions

If equilibrium conditions are enough to calculate the reaction forces due to applied load, it is known as a statically determinate beam.

In these types of beams, the number of unknown reaction forces equals the equilibrium equation’s number.

These beams are mainly used in bridges because temperature change can induce significant stresses in the bridge.

A statically indeterminate beam is called if equilibrium conditions are insufficient to calculate the reaction forces due to applied load.

The number of unknown reaction forces in these beams does not equal the equilibrium equation’s number.

The conditions arrive when we provide extra support to the structure than required make it statically indeterminate.

Extra supports ensures stability and increase the stiffness of the structure. For example, in trusses, we provide added diagonal members to assure stability.

A statically determinate structure is neither more satisfying nor poorer compared to the statically indeterminate system. Based on details, it may be more effective or more vulnerable.

Based on Construction Material

These beams are made of concrete in which steel bars are arranged as reinforcement. RCC beams are an essential part of frame structure and are commonly used in building construction.

If the beam is concealed in the RCC slab, it is known as a slab beam or hidden beam or flat beam.

These beams are made of steel mainly used in industrial construction and pre-engineered Buildings.

These beams are robust, durable, and readily available allow faster construction of the structure.

These beams are made of timber and used in older days. Now the use of these beams in the construction industry has been significantly reduced.

Composite beams are consist of two or more different materials, for example, steel and concrete.

As the name indicates, these beams have a straight form, and the maximum numbers of beams in the structures are straight beams.

As the name suggests the beams that have curved profile along its length is known as the curved beam. These beams are used in curved or circular shape buildings.

These beams have tapered profiles along their length, known as tapered beams.

Based on the Method of Construction

These types of cast on-site, for which firstly formwork is installed in the desired shape then fresh concrete is poured on it and let them dry. Then curing is done until concrete gains the desired strength.

These types of beams are made on manufacturing plants under controlled conditions. So the quality of such beams is better than constructed on-site.

The pre-stressed concrete beam is a type of RCC beam in which internal stresses are induced before being used to resist the tensile stresses produced in concrete due to the load.

According to the ACI code, these beams have more depth than regular beams, and their clear span to depth ratio is less than four.

Significant loads are transferred to the supports through compression force merging loads, and the reactions resulting in the strain distribution are no longer leaner than convention beams.

These beams are made of steel sections and are primarily used to carry heavy loads.

Lintel beams are an essential part of the structure in building construction to support the masonry over the doors, windows, and other openings.

To know more about lintel, please visit – What is Lintel? – Function & Type

Plinth Beam is an important superstructure member in building construction provided at or above the ground level, or plinth level is known as plinth beam.

To learn more about the plinth beams, please read – What is Plinth Beam? – Plinth protection, Difference Between Plinth Beam and Tie Beam

These beams connect two or more columns at any height in the structure refers to a tie beam.

25+ Types of Columns Used In Construction

Difference Between Tension and Compression.

What is Lap Length? How to Calculate it? – Complete guide