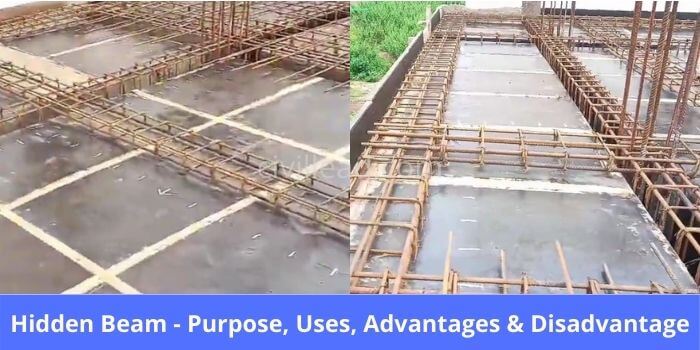 What is Hidden Beam?

An RCC beam is provided within the slab, which depth is equal to the slab depth refers to the hidden beam. It also refers to a flat beam or concealed beam.

The hidden beam forms an integral part of the frame structure and is usually used.

Due to strict and rigid architectural considerations, hidden beams come into existence. The load, which might be a brick wall, can be transferred without compromising the floor height by providing a hidden beam.

Today in this post, we will discuss the different aspects of reinforced cement concrete beam.

Why is it used?

The concept of a hidden beam comes from a flat slab. Mainly concealed beams are provided to transfer the concentrated wall load on the slab to the supporting beam and column.

Where is it Used in Buildings?

Concealed beams usually are used within the suspended slabs of considerable thickness where the slab span is significant.

It is also used when, due to architectural consideration, we can’t compromise the height of the floor, and we can’t provide a high depth beam.

Concealed beams are suitable to transfer the concentrated load of the wall on a slab to the supporting beam and column of the structure.

The concealed beam is given between living and dining areas, at a right angle to each other, hall and verandah. It provides a clean and level ceiling surface that gives a better appearance.

How to Design a Hidden Beam?

The design of a concealed beam is similar to regular beams except for depth. Its depth is defined and shouldn’t be more significant than slab thickness.

Hence it is necessary to increase the ratio of reinforcement and width to conquer this restriction to a specific limit.

Although a concealed beam has a similar depth to a slab, it reinforced separately with longitudinal bars and stirrups like a regular beam, and once the slab cast, it disappears.

For designing a concave beam analysis of beam and model with whole slab is necessary.

Concealed beams are desired structural component because of their several benefits, which include:

I hope know you have enough information about hidden beam.

What is Plinth Beam? Plinth Protection, Difference Between Plinth Beam and Tie Beam

How to Calculate Quantity of Steel in One way Slab?

Cracks in Concrete Slab – Why do they develop after Casting?

Difference Between Beam and Column

What is Column? – Types of Column, Reinforcement and Design Procedure

What is a Flat Slab? A reinforced concrete slab that...