What Is Wave Energy?

The incessant motion of the sea surface in the form of wind waves constitutes a source of energy which is known as wave energy. About 1.5 per cent of the incoming energy from the sun is converted to wind energy, part of this is transferred to the sea surface resulting, in the generation of waves. This, then, is carried to coastal lines where it is dissipated as the wave break. Extract energy from the wave is more efficient than a direct collection of power from wind since the wave energy is concentrated through the interaction of the wind and free from the ocean surface. 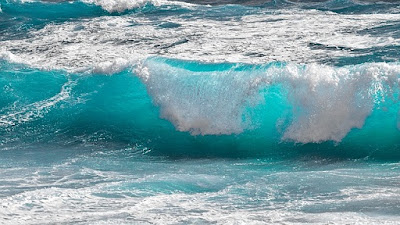 1. It is free, renewable and pollution-free energy resource.
2. Energy has been naturally concentrated in waves. Therefore, the energy density of ocean waves is greater than that of wind as well as the solar(the natural process that generate them)
3. Unlike tidal energy, some potential for the extraction of wave energy exists on almost any coastline.
4. Wave power devices do not require large land masses like solar and wind power devices.
5. Wave power devices are relatively pollution free. After removing energy from the waves, the water is left in a relatively calm state.
6. Hydrogen gas as a fuel can be produced.

1. With the present state of technologies, wave power is expensive.
2. Wave energy extraction equipment must be capable of operating in a marine environment and withstanding very serve peak stress in storms.
3. Relative scare city of accessible sites of large wave activity.
4. The various natural process might be affected if significant amounts of wave energy are removed from the coastal ecosystem, including sediment transport and the functioning of nearshore biological communities.
5. Marine mammal and sea bird population could also be affected by the physical presence of wave energy structures.

Also, read – What Is Geothermal Energy? Advantages and Disadvantages.

Thanks for reading this article. Please, don’t forget to share it.