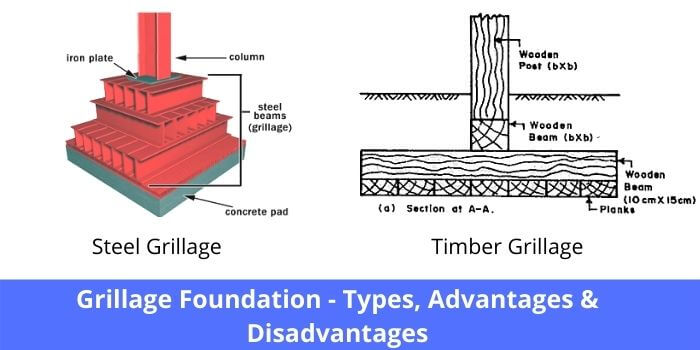 A grillage foundation made of two or more than two-tier beams placed at the right angle to disperse the load evenly over a large area.

A foundation made of two or more than two-tier beams superimposed in a concrete layer to distribute the load over a large area refer to Grillage Foundation.

It is suitable when the load transmitted by a column or wall is hefty, and bearing capacity of the soil is deficient.

It also helps to eliminate the deep excavation required for the foundation. It is provided at the column’s base.

Generally, this type of foundation is the right for columns, piers and scaffolds of massive structures.

Foundation and grillage look similar, but their function is different. Foundation transmits the load from to structure to the ground while grillage distributes the heavy load over the broad area of ground.

Based on the material, there are two types of grillage foundation.

This foundation consists of one or two-tier of RSJ ( Rolled steel joints) embedded in cement concrete. RSJs used in this foundation are also known as grillage beams.

In this foundation, depth is limited to 1 m to 1.5 m, and the width is increased considerably to pressure the soil within the permissible limit.

Grillage foundation may consist of only one tier when the wall is not carrying a hefty load.

The load carried by the steel stanchion or wall is first transmitted to the upper tier of the beams, then to the second tier lying below the upper one, and finally to the soil below the foundation.

A spacer bar of 30 mm diameter or pipe separator of 25 mm is used to hold each tier’s grillage beams in the position.

The minimum clearance between the adjacent beam’s flanges should not be less than 8 cm to facilitate significant placing and consolidation of the concrete.

The maximum clearance between the adjacent beams’ flange should be restricted to 300 mm or 1.5 to 2 times the flange’s width, whichever is smaller.

If beams are spaced at more than the maximum specified spacing, it is likely that the concrete between beams may not act monolithically with the rays, and such may become the cause of failure of the foundation.

A minimum concrete cover of 100 mm is maintained throughout the beams’ exposed surface and ends to protect the girder beams from corrosion. Concrete cover under the lower tier of beams should not be less than 150 mm.

Timber grillage foundation consists of timber planks, and timber beams can also be used to support heavy loads on weak soils. This foundation is suitable for the ground that always remains waterlogged.

In this foundation, no concrete block is used, but instead, the timber platform is used that consists of 50 mm to 75 mm thick wood planks installed touching each other.

Above this platform lower-tier of scantlings, nearly 80 mm × 120 mm size is placed covering the full length and breadth of the rectangular platform.

Lastly, a massive log is used at the centre of the scantlings of lower-tier and timber columns is centrally placed over it as shown in the image.

The load from the timber column is transferred to the lower tier of the scantling through massive logs placed directly below the column.

Sometimes timber grillage foundations may also be used below permanent walls. But in such case, timber must be preserved from possible harmful effects.

The grillage foundation helps connect the entire foundation into a unity structure and uniformly distribute the house’s load.

Mostly, it is designed as a monolithic RCC structure, and the metal frame gives its strength.

Practical Example of grillage foundation design for the auditorium

Grillage foundation made of steel or wooden joints fitted in a stepped manner. It disperses the load over the broad area of ground.

Generally, the grillage foundation is employed for heavy buildings such as town halls, towers, and factories.

Types of Foundations & Footings And Their Uses

What is the Foundation? A structure is generally considered to...