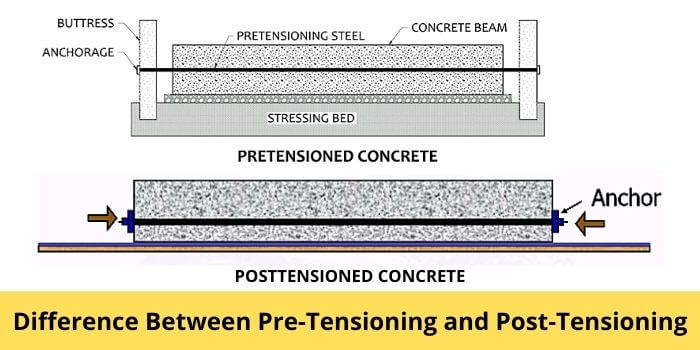 There are three main types of concrete PCC, RCC and PSC that is Plain cement concrete, Reinforced cement concrete and Pre-stressed concrete, used for the construction of building and bridges since a long time.

Concrete is much strong in compression and works well when used as a vertical column whereas when we use it horizontally as a slab or beam concrete can typically span for only short distances.

If we try to increase its length it begins to crack and fail hence, we have to increase its thickness but when we try to use PCC for longer horizontal spans in buildings and bridges its size and weight becomes too large and impractical.

To tackle this problem, we added metal reinforcing bars in the concrete to achieve greater length.

As a result, the reinforced cement concrete became an important structural material for bridge construction. Even reinforced concrete has a limited capacity to span distances before cracking and failing under stress.

Hence a new system of concrete is experimented for creating concrete to increase the span length even further with less weight.

The system is known as pre-stressed concrete. To understand pre stressing look at this concrete member when the load is applied the member bends like this.

To prevent this cracking additional steel bars are added at the bottom section and stretched it so that it can resist most of the tension.

The pre-stressed concrete beam is thinner lighter in weight and uses less concrete without cracking or breaking. I have already written a detailed article on prestressing of concrete, you can read it here Prestressed Concrete – Definition, Methods, Advantages and Disadvantages.

prestressing can be done in two ways one is pre-tensioning and is post-tensioning so in this article we will discuss the differences between these two methods so let us start.

In the case of pre-tensioning, the prestressing cables also called as strands are tensioned before casting the concrete. Latter concrete is cast enclosing the tensioned cables, so in this method, we can say first tensioning and then casting.

Where it can be done?

Mostly pre-tensioning is done in factories hence it is suitable for precast construction works.

Whereas post-tensioning can be done in factories as well as on-site.

In case of pre-tensioning, the size of the sections is limited due to transportation restrictions and also due to the availability of cranes capable of lifting the sections into place.

Whereas in the case of post-tensioning the size of the member is not restricted long-span bridges can be constructed with the help of this method.

In case of pre-tensioning similar prestressed members are prepared in a factory if the size variation happens then we have to manufacture a separate mould of that size.

Whereas post-tensioning can be done at site hence products are changed according to a structure.

Pre-tensioning is suitable for small structural elements which are easy to transport.

Whereas post-tensioning is preferred when the structural element is heavy.

pre-tensioning is more reliable and durable as compared to post-tensioning.

Whereas in the case of post-tensioning the durability depends upon the two anchorage mechanisms.

In the case of pre-tensioning, the loss of prestressing is not less than 18 per cent.

Whereas in the case of post-tensioning the loss of prestressing is not more than fifteen per cent.

pre-tensioning is cheaper because the cost of sheathing is not involved in this method.

Whereas post-tensioning is costlier because of the use of sheathing.

I hope now you understood the difference between pre tensioning and post tensioning.

If you found this article helpful please share it with your friends.

If you want to add any information related to this article, feel free to mention in the comment section.

What is Concrete Mix ratio? It is the process of...