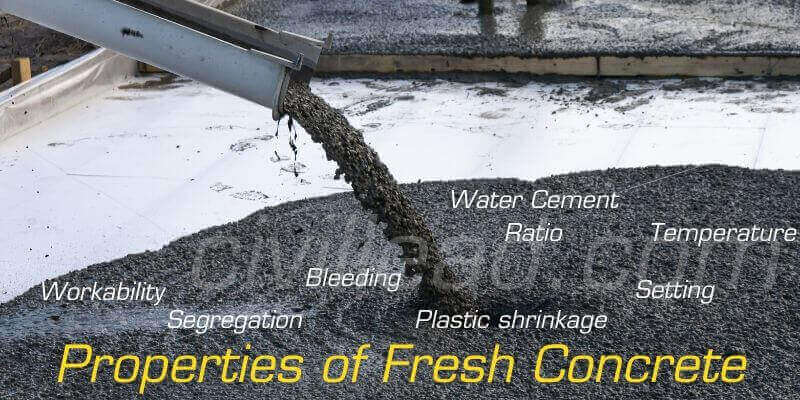 The term workability indicates the ease or difficulty with which the concrete is handled, transported and placed. The amount of water present in concrete should be in the proper ratio.

Generally, a higher water-cement ratio is required for good workability. In the actual function of water is to lubricate the concrete. The concrete which is easy for handling and placing is a workable concrete.

Segregation is the separation of the constituents materials of concrete. Segregation is of three types, firstly the coarse aggregates separating out from concrete.

Bleeding is a particular form of segregation, in which some of the water from the concrete comes out to the surface of the concrete.

The water rising to the surface carries with it particles of sand and cement which on hardening form a scum layer popularly known as laitance. Bleeding takes place in a highly wet mix, badly proportioned and insufficient mixed concrete.

After the fresh concrete has been placed in forms, concrete undergoes a volumetric contraction while it is in a plastic state(before the concrete set). This is known as plastic Shrinkage.

Plastic shrinkage is so-called because of the form while the concrete is still plastic, i.e. has not set. Rapid drying of the surface of the plastic concrete cause it to shrink and crack. They rarely occur near the edges of a slab as those locations the concrete is usually free to move.

It can starts after 30 minutes of concrete pouring or during finishing.

Setting time depends on the type of cement and it can be increase or decrease by adding admixture in concrete.

Concrete is not recommended to be placed at a temperature above 40°C without proper precautions as laid down in IS:7861(part -1).

The ratio of the amount of water to the amount of cement by weight is termed the water-cement ratio. The strength and quality of concrete depend on this ratio.

The quantity of water is usually expressed in litre per bag of cement. if water required for one bag of cement is 30 litres, the water-cement ratio is equal to 30/50 = 0.6.

These are the properties of fresh concrete. If you found this piece of information helpful, please be sure to share it with your friends.

If you want to add any property of fresh concrete which has missed in this article, let me know in the comment section.

Thanks! for reading the article.

Grade of Concrete and Their Uses

2 thoughts on “What are the Properties of Fresh Concrete?”