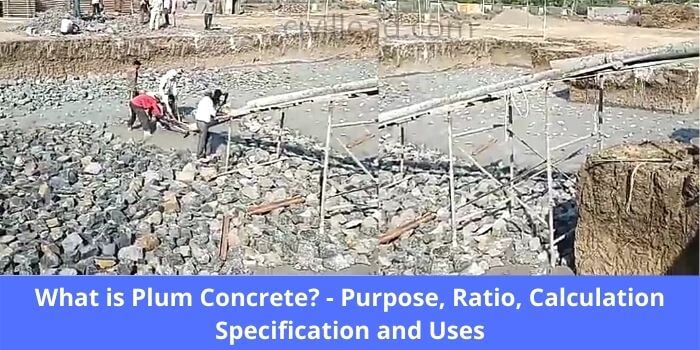 What is plum Concrete?

In mass concreting work, hard natural stones of size up to 300 mm or even big are used, such Concrete is known as plum concrete, and the stone used in this concrete is called plum.

Plum concrete is an economic adaptation for mass concreting. The application of plum concrete is suitable if the necessary thickness of PCC is more or unreasonable. It saves cost, provides economy and protects heat generation.

Usually, it is done to bypass using an excessive amount of cement without compromising its strength.

It is mainly used in mass concreting of foundations, dams, and other mass concrete works where the quantity of levelling courses may be extreme due to the strata’s steep slope.

It is prepared by the inclusion medium or large hard stone size of up to 300 mm.

It should not be greater than one-third of the concrete mixer cross-section.

As per technical specification, plum concrete should be formed with a mixture of 40% large stones and 60% plain cement concrete.

The stone used for this Concrete should follow the ASTM standard, and the specification will be as per the concrete design.

Plum concrete is used to attain the required surface-level below the foundation and footing.

It is used to lessen the cost of PCC if the required thickness of PCC is large.

Primarily it is used in mass concreting work such as side slops, barrier, and gravity dams.

For instance, in the construction of a residential building, the small area under a footing is too steep, then it is preferable to use plum concrete.

Plain cement concrete or PCC is the most straightforward form of Concrete. It is produced by mixing primary ingredients such as cement, sand and aggregates.

While in plum concrete, instead of aggregates, medium and large stones are used as filler material instead of coarse aggregates.

So the main difference between PCC and plum Concrete is the boulders insertion in the concrete mix.

It serves as a filler material, lessening the quantity of coarse aggregates, which are generally expensive. Thus, it reduces the cost of PCC.

Plums beyond 160 mm and any reasonable size may be utilised in PCC work up to the maximum limit of 20% by concrete volume when specially allowed by the engineer-in-charge. The stones should be spread evenly and should not be denser than 150 mm from the surface.

As I mentioned above, plum concrete is primarily used for surface levelling. It should contain 40% boulders and 60% M10 or M20 concrete of its total volume.

Suppose an area of 10 square meter and the thickness required for concrete is about 1000 mm, then.

All the above-estimated quantity require to be measured using a weighing machine and used subsequently.

How to Prepare Plum Concrete?

Special attention is required while placing the plums in the concrete to prevent air traps. The usual making process is as follows:

The boulders selected as plum should be strong, durable and free from dirt or clay. They should not be flaky. It is preferable to use the stone from the same rock from which aggregate. It should be washed and cleaned before using.

Firstly, the boulders needed for making plum concrete are carefully hand-picked. The boulders (plums) size should be up to 300mm.

The plum size is limited to nearby 1/3rd of the total volume. The plums can either be hand-picked or randomly picked by the labours and transported to the site.

Still, the stones should be spread uniformly in all the cases and should not be denser than 150 mm from the surface.

Prestressed Concrete There are three main types of concrete PCC,...