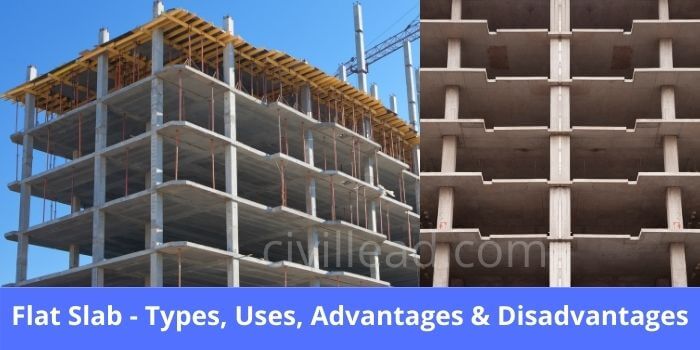 What is a Flat Slab?

A reinforced concrete slab that generally does not use beams and transfers the load directly to the supporting column refers to the flat slab.

A flat slab gives a plan ceiling surface providing better diffusion of light, simple constructability with the saving in the formwork, shorter story height or considerable headroom, and pleasant appearance.

These slabs are directly held on a suitably spaced column with or without drop panel and column heads. Considering the possible load transfer mechanisms.

The zones near columns are subjected to high negative moments and shear forces.

For heavy loads and large span, the structural demands direct the slab’s thickened portion around the column called drop and a widened profile at column top identified as the capital or column head.

In flat slab column tends to punch through the slab due to punching shear, which can be eliminated using the below methods:

In such slabs, columns are provided with an extended head known as capital or column head. For carrying heavy loads, the thickness of the slab over columns increases, and the thickened part of the slab is recognized as a drop panel.

For light load, drop panels and the column heads are omitted. Such slabs with uniform thickness supported on the prismatic column are called flat plates.

The drop, when implemented, should be rectangular in plan, and the minimum length of the drop in every direction should not be less than one-third of the panel’s length in that direction.

Generally, the column head size should keep approximately one-fifth of the span. However, where the column heads are given, the part of a column head that lies within the most significant pyramid with a vertex angle of 90° or right circular cones can be included entirely within the column. For the design direction, a column head outline should be considered.

The column head increases the shear strength of the slab and reduces the moments by reducing the clear span ln.

When the load is heavy, and the span is long, a two-way joist or grid system, commonly known as a waffle slab, may be used.

Such waffle slabs must use solid panels acting as drop panels around the columns. The size and shape of the solid part depend on the requirements of shear and moment.

Beams can also be formed, eliminating a row or two of waffles on the column centerline. Alternatively, the long span can have a flat banded slab.

The bands or wide beams are provided 1.5 to 2.0 times as deep as the slab and as wide as necessary up to the width of the column strip. The use of this practice is, however, limited.

Stiffness consideration usually controls the thickness of the flat slab, represented in the ratio of span to effective depth.

However, for computing the modification factors for tension reinforced, the effective percentage of steel across the entire width of the panel at mid-span should be used.

For slabs with drops, as mentioned earlier, the long span to effective depth ratio can be applied directly, whereas, for other cases, the ratio shall be multiplied by 0.9.

The appropriacy of thickness has to be determined for shear and bending moments. The flat slab should have a minimum thickness of 125 mm.

Engineers use flat slabs in multiple buildings because of their benefits over other conventional RCC floor systems in different cases. Essential services of flat slabs are given below:

Having many benefits of the flat slab also has some disadvantages, which are as follows.

Difference Between One way and Two way Slab

How to Calculate Quantity of Steel in One way Slab

Cracks in Concrete Slab – Why do they develop after casting?

What is an Estimate? – Importance, Estimate of Building in Excel