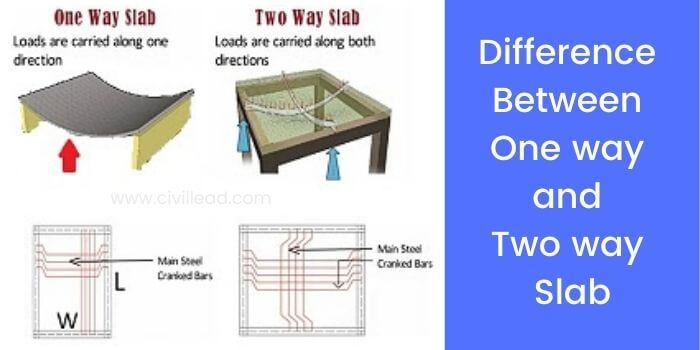 What is the Slab?

In reinforced concrete construction, the slab is an extensively used structural element forming floors and roofs. A concrete slab is the plane element having a depth d much smaller than its span and width.

It may be supported by reinforced concrete beams, by masonry wall or directly by column. The difference between one way and two way slab are as follows.

Slabs are classified according to the system of supports as:

What is a One-way Slab?

Slab supported only on two opposite sides by rigid supports carry the load by flexure in the direction perpendicular to the supports.

The plane surface of a predominantly uniformly loaded slab deforms into a cylindrical surface in which curvature and hence bending moment develops only in one direction such slabs are called a one-way slab.

One way slab essentially acts as shallow beams with a large width. The slabs supported on all four sides also behave as one-way slabs if the longer span ratio to shorter span is greater than two.

What is Two-way Slab?

The rectangular slabs supported on two adjacent, three or four edges, and with the ratio of longer to shorter span less than two, which carry the load by flexure in two perpendicular directions are called two-way slabs.

The slabs which are supported directly on the column without beams or girders are called flat slabs.

In this type of slabs, large moments and shear forces are produced in the columns’ vicinity. Therefore, the slabs are thickened in the area enclosing the column.

The columns are flared at the top to reduce stress due to shear force and negative bending moment. These arrangments are referred to as drop panels and column heads, respectively.

When the spans of the slab are not large and loads are not excessive, both the panel drop and column head may be omitted.

Such a slab is called a flat plate. A flat slab with a recess formed(by removable and filler blocks) on the soffit so that it comprises a series of ribs in two directions called waffle slabs.

The slabs supported on a series of intersecting long grid beams is called slab grid.

How do we calculate a one way or two-way slab?

If the L/b ratio is greater than or equal to 2 or then it is considered a one-way slab.

If the L/b ratio is less than 2 then it is considered a two-way slab.

Difference Between One way Slab and Two way Slab

In practice, the choice of the one-way slab and two-way slab for a particular structure will largely depend upon the

Also, Read – How to Calculate Cutting Length of Stirrups For Beam and Column?

From the below drawing, it is clear that the L/B ratio is less than 2, hence it is a two-way slab, that’s why main bars or cranked bars are provided at longer span as well as shorter span also.

If you found this information helpful please share it with your friends.

What is Lap Length? How to Calculate it? – Complete Guide

22 thoughts on “Difference Between One way and Two way Slab”