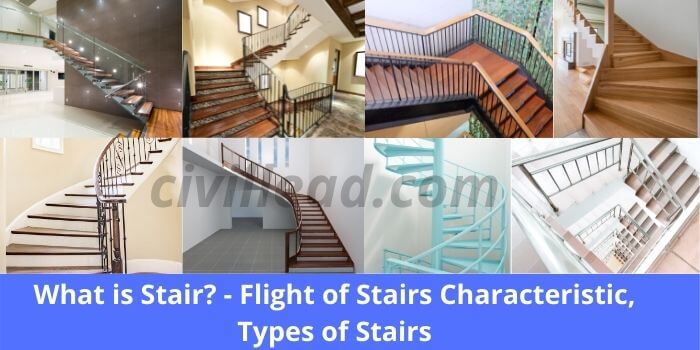 A structure with a series of steps affords up and down between the floors or landings known as stairs.

The enclosed place in which the stair is placed is known as the staircase. The area or opening owned by the stair is called a stairway or flight of stairs.

A stair contains treads, risers, stringers and balusters, and so many other relevant components.

Stair may be constructed from brick, stone, timber, steel, and reinforced cement concrete.

A connected series of steps without any break between landing and floor is called flight or stairway. Usually, people call it stairs.

It is called the flight of stairs because the flight symbolizes the “journey toward up” by using feet only without wings.

Stairs are an essential element of the buildings. Without stairs, it won’t be easy to climb to the building’s top.

Although elevators and escalators are available for this purpose which are convenient, stairs offer great exercise that is good for health.

Stairways have various forms straight, half turn, spiral, round, etc. they can be constructed in multiple straight pieces located at an angle and joined by landings.

The stairway consists of multiple steps. Each step consists of tread and riser. The horizontal part of the step you step on is called trade, while the vertical portion between trades is called the riser.

A good staircase should have the following characteristics.

A stair with parallel steps and risers in the same direction is known as a straight stair. It has only a single flight or two or even more in its length, divided by a landing.

In this type of stairs, flights take turns. Types of turning stairs are as follows:

Stairs that turn through one right angle are called quarter-turn stairs.

Since it’s bent or crooked round in fancied resemblance to the dog’s leg, it is called dog-legged stair.

It is suitable with restricted going and when the width of the available space is equal to two flights combined width.

In this type of stair, successive flights rise in opposite directions. The flight of the stair may be separated by:

It is suitable with restricted going and when the width of the available space is equal to two flights combined width.

One should avoid the first method as far as possible as it makes the stair too steep and dangerous near the newel post.

The other name for dog-legged stair is a newel stair because it forms an essential part of the structure. A newel is generally placed at the foot and head of the stairs each flight.

This type of stair is similar to a dog-legged stair, accepting a rectangular hole or opening between flights. Hence the stair’s width will be the sum of two times step width plus the width of the well.

Newels are installed at the head and foot on each stair flight, forming a notable point for the stair to be declared a newel stair. It is a convenient form of the stair, and the well hole allows top lighting.

Open well stair provides satisfying results, so one should try to provide an open well stair, although it needs little more space than a dog-legged stair.

This stair is common in a public building in which it appears like a noticeable feature.

This type of broad stair flight is divided at a landing into two narrower flights which branch off to the right and left.

These stairs consist of a hole or opening between the flights(backward and forward).

These stairs have either geometrical form, and they don’t need a newel post. The handrail of geometrical stairs continues without interruption and any angular turn.

In this type of stair, both the string and rails are continuous and set out according to geometrical principle.

These stairs need a little more width, but space for length is similar to dog-legged stairs.

The direction change is gained by the winders radiating from the curve’s center of curvature between the flight.

Circular stairs are constructed of winders, and there are two forms of circular stair spiral stair and circular geometrical stair.

These stairs are usually given at the building’s backside to render access to its various floors for service purposes. This type of stair is mainly constructed in RCC and iron etc.

In these stairs, all the steps radiate from a standard center or newel post. They are made up of wooden, steel, or concrete. It is provided where the available space is less.

I hope now you have adequate knowledge about types of stairs and flight of stairs. Please share this information.

Pop Vs Putty – Difference Between Pop and Putty

Standard Room Sizes When we plan to construct our dream...